Jets’ rookie QB Zach Wilson doesn’t feel comfortable giving any evaluations of himself, especially when he feels like he still has the chance to improve every single day.

“It’s hard to say exactly how you did,” Wilson said, via Dennis Waszak Jr. of the Associated Press. “Personally, in my eyes, I feel I can improve every single day. I feel like I’m learning something every single day. Even on the good days, it’s still frustrating, and it’s just because it’s like a foreign language. Every single day, it’s the same plays, but you’re getting different reps, different looks at it, different defensive coverages, whatever it is.”

Jets’ OC Mike LaFleur says that the team has thrown a lot at Wilson so far, adding that while there has been a learning curve he has still done a good job. Wilson says he is still a long way from being ready for Week 1.

Jets’ HC Robert Saleh knows that Wilson is committed to football and wants to learn from his mistakes, but thinks that getting the rookie as many reps a possible is a great way for him to continue improving.

“Zach loves ball, that’s one thing that I’ve learned,” Saleh said. “He’s unflappable in the sense that he doesn’t care whether something went good or bad, he wants to know why it went good or bad. He wants to learn from it. He is wired exactly the way you want all players to be wired. So now it’s just a matter of him getting as many reps as possible, to go into as many situations as possible, to see how much he can get better.”

Patriots’ RT Trent Brown thinks that rookie QB Mac Jones will have no problem finding success in New England, especially due to the situations he has been a part of in the past at Alabama.

“Mac, he’s a young guy, but you can’t really just refer to him as a young guy,” Brown said this week, via Ryan Hannable of WEEI. “You can tell he’s been at a place where [he’s] got some coaching. I think he’s going to be special here in the future.” 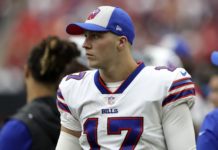