The Denver Broncos brought in 11 players for tryouts during their rookie minicamp including:

“He’s talented as hell,” Uzomah said, via Youtube.com. “He’s smart. He’s a smart kid. He’s an unbelievable player and he has an unbelievable football mind and I’ve been excited just over the couple months I’ve been here of what he knows and what he’s expecting of us.”

“We’re very deep at safety. We were deep at safety before, and then you add a guy like Kyle and then the depth explodes in your face. It’s like, man, the depth chart is full with really good players,” he said via Ravens Wire. “We know all about the guys that are playing back there. Chuck [Clark], we know about Chuck. You guys have seen Chuck; he’s one of the best safeties in football, in my opinion. Marcus [Williams], obviously, was a high-price free agent that we were pleased to get. After that, Tony Jefferson…Tony Jefferson can play football. Geno Stone is a really good, young safety. Brandon Stephens who started last year at safety for us, he also has corner flexibility. With all of those safeties, he’s probably going to be moving to corner a little bit and playing, but he can play all the spots. So, there’s flexibility there. I’m really happy with that group.” 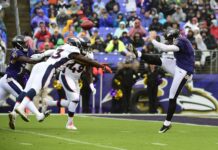