Moving to 4-3 defensive end instead of 3-4 outside linebacker was a major factor in Justin Houston‘s decision to join the Colts this offseason.

“I just wanted to be in a 4-3 (defense),” Houston said via NFL Media’s Kevin Patra. “I think I didn’t get enough credit for me being in a 3-4, and dropping a lot of the time, so my sack numbers weren’t as high as I would like for them to be. So just being in a 4-3 and don’t have to think about dropping no more is something I want to do for the rest of my career. I just want to go forward and rush the passer.”

Jaguars DE Calais Campbell is happy that the main responsibility for the Jaguars’ success no longer falls on him and the defense but on QB Nick Foles.

“The thing I love about this year is it really comes down to Nick Foles,” Campbell said to Ian Rapoport of NFL Media. “He’s a guy who’s over 30, has a lot of experience, won a Super Bowl MVP, but really what he brings is that confidence. He’s a natural leader. When he breaks the team huddle at the end of practice, you can see guys really hear him and that’s so important. Obviously what he can do throwing the ball is great, but what he does for the actual overall team, giving us more confidence and belief.”

Jaguars WR Terrelle Pryor says he feels fully recovered from an ankle injury that seemingly derailed his career after a breakout 2016 season with the Browns.

“The problem for me the past two years was really my foot,” Pryor said via John Oehser of the team’s website. “After I tore my ankle two years ago, it was just so hard stopping and starting. Finally, it’s to the point where I have no pain and feel no stoppage on my ankle. I thank God for giving me the opportunity to come back and be able to have my foot exactly how I feel. It feels good. I’m happy about that.” 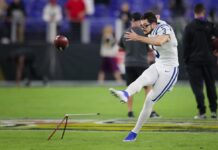