Titans QB Ryan Tannehill‘s agent, Pat Dye Jr., said Tennessee will have “every opportunity” to finalize a long-term extension with his client before free agency.

However, Dye Jr mentioned that the quarterback is prepared to test free agency.

“They will have every opportunity to work it out if they determine he’s their long-term answer,” said Dye, via Jeremy Fowler. 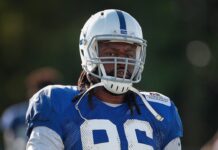