Losses, injuries and a lack of production with just seven sacks have combined to make 2019 a forgettable year for Broncos LB Von Miller. After Denver’s latest loss, Miller let loose with some of his frustrations after the game, which led to some speculation about the 30-year-old’s long-term future in Denver.

The Broncos have a team option on Miller, who has base salaries of $17.5 million each of the next two seasons. However, they seem unlikely to move on despite the ongoing rebuild and Miller says he won’t push his way out.

“I said before the week, I’m tied to the Denver Broncos,” Miller said via the Athletic’s Nicki Jhabvala. “It’s pro sports and we all know things can change here and there. But for me and my mindset, it’s a marriage and I’m not looking forward to divorcing anytime soon.”

Chargers QB Philip Rivers isn’t the only player on the team with an uncertain future heading into 2020. On the offensive side of the football alone, the Chargers have RBs Melvin Gordon and Austin Ekeler (RFA), TE Hunter Henry and G Michael Schofield slated to hit free agency after the season. That uncertainty has bled into the locker room.

“I think upstairs they’re trying to keep that on the down-low until the season’s over because it’s about to be a frenzy in our locker room, especially on the offensive side with all the contracts that are coming up,” Ekeler said via Jeff Miller of the Los Angeles Times. “Everyone’s kind of looking around like, ‘Hey, what do you guys think is going to go on?’ None of us know. We don’t know what they’re going to do upstairs. We know what we want. But that’s a different story.”

Raiders HC Jon Gruden said he still believes DB Lamarcus Joyner is a “big part of the solution” to their defense and noted that injuries have affected how they are using him.

“We’re going to get the bang [for our buck],” Gruden said. “When you lose you safeties and your middle linebacker, it’s a big issue. We didn’t have a lot of proven depth. I’m not going to sit up here and make excuses, but Joyner’s a big part of the solution. So is Trayvon Mullen and our young corners. We were making progress for a while, but I think Joyner’s a big part of the solution even though the stat sheet might not show it right now.”

Gruden added that Joyner has been valuable in the nickel role and they would prefer to not have to get a new player accustomed to that position.

“We’ve moved everybody around quite a bit on this team this year, but Lamarcus is a valuable part of our team as the nickel, and I don’t want to break in a new nickel either,” Gruden said. “You know, rob Peter to pay Paul. Once you move your nickel, you’ve got to find a new nickel, and those guys don’t grow on trees either.” 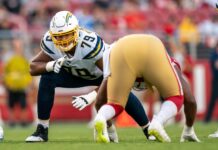 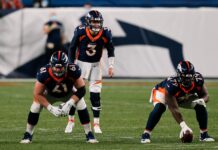 186,384FansLike
7,623FollowersFollow
276,480FollowersFollow
© NFLTradeRumors.co is an independent news source and has no affiliation with the National Football League (NFL), NFL.com, or any team(s).
wpDiscuz