Saints RB Alvin Kamara tested positive for COVID-19 on Friday, according to Nick Underhill. Kamara did not practice on Friday and is waiting for confirmation from a follow up COVID-19 test. 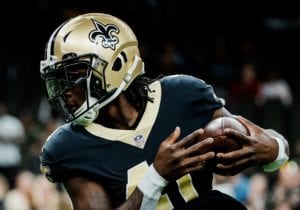 According to Underhill, Kamara has not yet exhibited symptoms and is feeling fine.

Kamara would be forced to miss Week 17’s game should he produce a second positive test.

The Saints reportedly traveled without Kamara for their Week 17 game against the Panthers.

Kamara was in line to be an unrestricted free agent in 2021 when he agreed to a five-year extension worth $77.133 million this past September.