According to Ian Rapoport, WR Antonio Brown has settled the civil case between him and former trainer Britney Taylor.

Brown’s agent released a statement on behalf of her client to Rapoport.

Taylor had filed this case last year accusing Brown of sexual assault and harassment. It was one of a number of off-the-field issues hanging over Brown.

Now that it appears to be resolved, it could clear the way for the still-unsigned Brown to land back with another team. 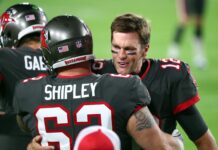