According to Ian Rapoport, the Bears are cutting WR Riley Ridley ahead of Tuesday’s deadline. 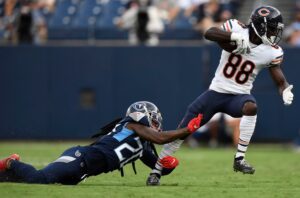 Ridley, 25, is a former fourth-round pick in the 2019 NFL Draft out of Georgia. He was entering the third year of his four-year, $3.2 million rookie contract.

In 2020, Ridley appeared in five games and recorded four receptions for 39 yards (9.8 YPC) and no touchdowns.