League sources tell Jason La Canfora of CBS Sports that the Bears are “virtually certain” to fire HC John Fox next week, as his relationship with GM Ryan Pace has “suffered.”

This shouldn’t come as much of a surprise, considering that Chicago was expected to move on from Fox for a while now.

La Canfora writes that developing QB Mitch Trubisky will be paramount in regards to the Bears’ coaching search and Chicago is expected to have interest in some notable offensive coaches including Patriots OC Josh McDaniels and Vikings OC Pat Shurmur.

Given that Pace has ties to the Saints, La Canfora wouldn’t be surprised to them inquire about some of New Orleans’ coaches too. Ian Rapoport mentions that Saints OC Pete Carmichael could be a look from the Bears regarding their head coach job.

As for DC Vic Fangio, La Canfora says that Chicago would like to retain him, but it may prove difficult, as he will be highly sought after coordinator as a free agent.

We’ll have more regarding Fox and Bears as the news is available. 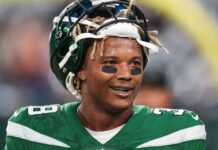