The Chicago Bears hosted four players for tryouts and visits on Friday including veteran LB Alec Ogletree, according to Albert Breer. 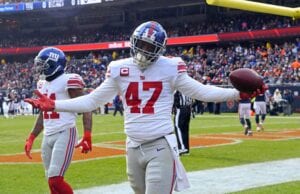 The Rams traded Ogletree to the Giants in 2018 for a fourth-round pick and a swap of late-round picks. New York opted to release him this past February.

In 2019, Ogletree appeared in 13 games for the Giants and recorded 80 tackles, one sack, one interception and six pass defenses.