Ian Rapoport of NFL Media reports that the Bears and WR Allen Robinson are not expected to reach an agreement on a long-term extension before this week’s deadline, which means Robinson will play out the 2021 season under the franchise tag. 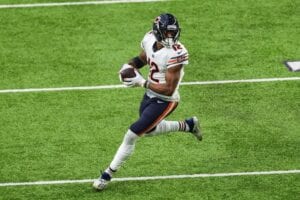 This fits with what Tom Pelissero of NFL Media reported last week. Pelissero mentioned that there have been had “no substantive talks” between the Bears and Robinson for months regarding a long-term extension.

Pelissero added that it’s unlikely that the two parties will get an agreement in place before next week’s deadline.

“At this point, it seems unlikely a long-term deal will get done,” Pelissero said.

Robinson recently said that he isn’t thinking about a potential contract extension with the team.

“We’ll see,” Robinson said, via NFL.com. “I think the biggest thing like, again, like I said, just about going out there this year, having fun, making plays, trying to help this team get back into the playoffs. I think that’s the main thing. That’s what I’ve set out during the course of this offseason. Every time I get on the field, into my workouts and things like that, it’s how can I get better? How can I help put this team, how can I help put this offense in a better situation than we were in last year?”

Robinson changed course and quickly signed his franchise tag worth $17.9 million for the 2021 season earlier this offseason. That means he’s under contract and would be subject to fines for any holdout.

The two sides have until July 15 to work out a long-term deal otherwise Robinson has to play out 2021 under the tag.

Robinson, 27, is a former second-round pick by the Jaguars back in 2014. He played out the final year of a four-year, $3.510 million rookie contract before agreeing to a three-year, $42 million contract with roughly $25 million guaranteed with the Bears back in 2018.

In 2020, Robinson appeared in all 16 games for the Bears and caught 102 passes for 1,250 yards receiving and six touchdowns.

We’ll have more on Robinson and the Bears as the news is available.