Bears OLB Robert Quinn says he didn’t expect to be traded earlier this offseason and wants to be in Chicago, per Courtney Cronin. 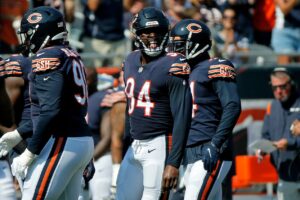 He told reporters at the beginning of training camp he expects to play for the Bears.

“I’ve been traded twice,” he added via Cronin. “You get tired of moving…I expect to be here but if not, that’s out of my control.”

Quinn didn’t report to mandatory minicamp and subjected himself to fines. He also openly speculated about the possibility of the Bears trading him and other reports suggested that might have been his preferred outcome. The Bears have been reticent to move him so far, however.

The veteran would be an appealing trade asset for Chicago if the team changed its mind considering that he’s coming off an 18.5 sack season, he’s 32 years old and has an affordable salary of around $13 million for the 2022 season.