Pelissero adds it’s a clean break so Newsome should be ready to go after an eight-week recovery timeline, which should have him back in time for training camp.

Newsome, 22, was drafted by the Bears in the sixth round out of North Carolina in the 2021 NFL Draft.

During his college career, Newsome recorded 188 receptions for 2,425 yards (13 YPC) and 18 touchdowns. He also added 20 rushing attempts for 178 yards and two more touchdowns. 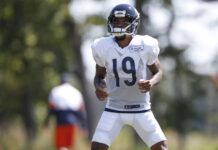