Sample will soon be placed on the injured reserve after injuring his knee in Week 2 against the Cowboys.

Taylor said in recent weeks that Sample will require surgery that will sideline him for several months, so this does not come as a big surprise.

Sample, 26, was drafted in the second round by the Bengals out of Washington in the 2019 NFL Draft. He’s in the final year of a four-year rookie deal worth $5.5 million.

In 2022, Sample appeared in two games for the Bengals and caught two passes for minus-2 yards. 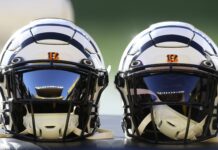