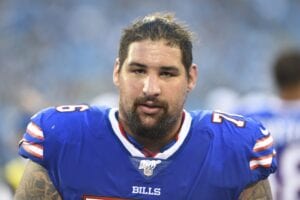 Feliciano, 28, is a former fourth-round pick by the Raiders in the 2015 NFL Draft out of Miami. He finished out the final year of his four-year rookie contract.

Feliciano eventually earned a starting role for the Raiders in 2018 before departing for a two-year contract with the Bills last year.

In 2019, Feliciano appeared in all 16 games for the Bills, making 16 starts at right guard. Pro Football Focus has him rated as the No. 38 guard out of 83 qualifying players.