According to Tom Pelissero, Bills OL Bobby Hart has been suspended for Week 3 after violating the league’s unsportsmanlike conduct rules in Monday’s game against the Titans. 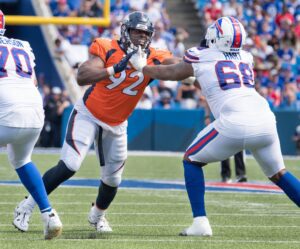 Field Yates reports that Hart confronted a Tennessee player in the tunnel and threw a punch which instead made contact with a Titans’ coach in the head.

Hart was signed by the Bengals in February for the 2018 season and returned to Cincinnati on a three-year, $21 million in 2019. However, the Bengals opted to release him last year.

Hart signed a one-year deal with the Bills for the 2021 season. Buffalo cut him coming out of the preseason and he landed with the Dolphins practice squad briefly before being cut and returning to the Bills on the practice squad.

In 2021, Hart appeared in four games for the Titans and Bills, making one start.