On Friday, Bills HC Sean McDermott announced during a radio appearance that OL Cody Ford is out for the season after suffering an injury in practice this week, per Sal Capaccio. 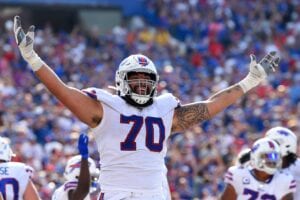 Ian Rapoport reports that Ford specifically suffered a torn meniscus and is set for surgery that will take 3-4 months of rehab.

You can expect the Bills to place him on injured reserve and add someone to their roster in the near future.

Ford, 23, is a former second-round pick of the Bills back in 2019. He’s currently in the second year of his four-year, $7.5 million contract.

In 2020, Ford appeared in seven games, making seven starts for them at guard.

190,642FansLike
7,623FollowersFollow
275,136FollowersFollow
© NFLTradeRumors.co is an independent news source and has no affiliation with the National Football League (NFL), NFL.com, or any team(s).
wpDiscuz
You are going to send email to
Move Comment