According to Tom Pelissero, the Bills are releasing TE Jacob Hollister. 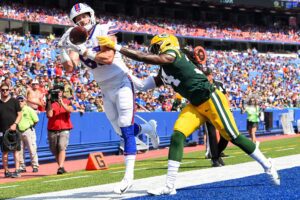 This is a bit of a surprise, as Hollister had been competing to start during camp.

It’s possible this move is more procedural, as Hollister is a veteran and doesn’t have to pass through waivers, so Buffalo could bring him back shortly.

He made a base salary of $3.27 million for the 2020 season and was testing the market as an unrestricted free agent when he signed a one-year deal with the Bills.