According to Adam Schefter, Bills S Jordan Poyer will not hold out from mandatory minicamp this week as he continues to seek a new deal from Buffalo. 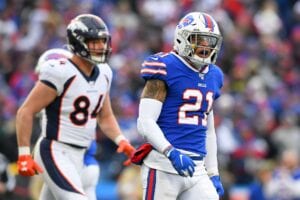 Poyer is entering the final year of his contract and has expressed his desire for a new deal to management this offseason, changing representation and hiring star agent Drew Rosenhaus.

Poyer, 30, is a former seventh-round pick of the Eagles back in 2013. He was waived as a rookie and claimed by the Browns, eventually playing out his four-year, $2.222 million rookie contract in Cleveland.

In 2021, Poyer appeared in 16 games for the Bills and recorded 93 tackles, three sacks, five interceptions and nine pass deflections. He was an All-Pro selection last year.