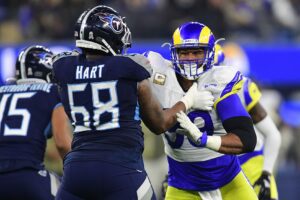 The move makes room for fifth-round OT Tommy Doyle, who was activated from the COVID-19 list.

Hart signed a one-year deal with the Bills for the 2021 season. Buffalo cut him coming out of the preseason and he landed with the Dolphins practice squad briefly before being cut and returning to the Bills on the practice squad.