According to Adam Schefter, the Cardinals and QB Kyler Murray have finalized a five-year, $230.5 million extension that includes $160 million guaranteed. 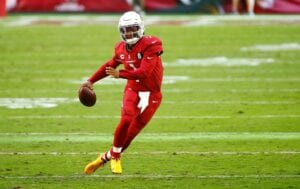 That’s a new money average of $46.1 million per year, which just barely pushes Murray ahead of Browns QB Deshaun Watson and makes him the NFL’s second-highest paid quarterback.

However, Watson got the full $230 million of his deal guaranteed.

Things had reportedly cooled between Murray and Arizona and ESPN’s Jeff Darlington reported an extension before training camp was possible. Ian Rapoport reported the two sides were closing in on a deal as Murray reports to training camp today.

There was a lot of tension between the two sides earlier this offseason but Murray reported for OTAs and Darlington said it felt like the drama was in the rearview mirror.