Pro Football Talk and Aaron Wilson have confirmed a report from Josh Pasteris that the Browns QB Deshaun Watson and the NFL have agreed to a disciplinary settlement. 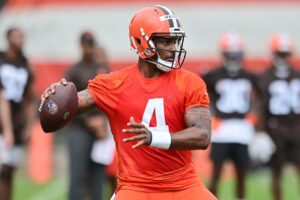 Watson will have his suspension increased to 11 games and he will be fined $5 million. He’ll be eligible to return in Week 13 against his former team, the Houston Texans.

Through the team, Watson released a statement on the suspension:

The NFL and Watson’s camp, including the NFLPA, had been discussing a settlement for some time now to finally bring this situation to a resolution.

The NFL was appealing the ruling from judge Sue Robinson, the independent arbitrator, who recommended a suspension of six games for Watson.

Judge Robinson cited a lack of remorse in her decision on Watson and the quarterback publically apologized ahead of starting the team’s first preseason game.

“I want to say that I’m truly sorry to all of the women that I have impacted in this situation,” Watson told Aditi Kinkhabwala. “The decisions that I made in my life that put me in this position I would definitely like to have back, but I want to continue to move forward and grow and learn and show that I am a true person of character and I am going to keep pushing forward.”

“I know I have a lot of work to put in, especially on the field to be able to make sure I’m ready to play whenever that time comes whenever I can step back on the field,” Watson continued. “But also, the biggest thing is I want to continue counseling and I want to make sure that I’m growing as a person, as an individual for my decision-making on and off the field. I want to make sure that I’m just evolving in the community as much as possible, and that is for the Cleveland community, that is the NFL community and beyond.”

More than two dozen women have said Watson behaved inappropriately during massage therapy sessions. He has settled 23 of the 24 civil lawsuits against him for sexual misconduct.