Adam Schefter reports that Urban Meyer is out as the Jaguars’ head coach less than a year into his tenure with the team. 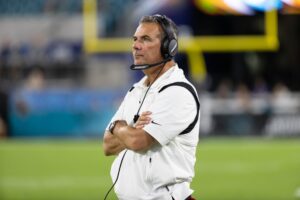 Here’s a statement from Jaguars’ owner Shad Khan regarding the news:

“After deliberation over many weeks and a thorough analysis of the entirety of Urban’s tenure with our team, I am bitterly disappointed to arrive at the conclusion that an immediate change is imperative for everyone I informed Urban of the change this evening.  As I stated in October, regaining our trust and respect was essential.  Regrettably, it did not happen.

“Trent Baalke continues as our general manager and will work with Darrell to ensure that our team will be inspired and competitive while representing Jacksonville proudly over our final four games of the season.

“In the spirit of closure and recharging our players, staff and fan base, I will not comment further until some point following the conclusion of the NFL season.”

There were numerous incidents during Meyer’s short time with the Jaguars and it had gotten to the point where change was inevitable.

Earlier in the day, former Jaguars K Josh Lambo alleged that Meyer kicked him during pregame warmups this past August.

There was also the incident where Meyer opted to stay in Ohio and not fly back with the team following their loss. Pictures later surfaced of Meyer at a bar.

Recent reports mentioned that tensions boiling over between Meyer, his coaching staff and the players.

Meyer came out of retirement to take the lead job at Ohio State in 2012 and was in that position until 2018 before retiring again citing health reasons.

The Jaguars hired Meyer out of a TV analyst job to be their head coach in 2021. He agreed to a five-year contract.

Meyer posted a 2-11 record with the Jaguars.