According to Tom Pelissero, the Jets have fired DC Gregg Williams. 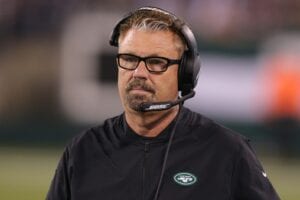 New York’s defense under Williams has been bad this year, but it appears Williams’ Cover-0 call that led to the Raiders’ game-winning touchdown with five seconds left on Sunday was the final straw for the team.

Ian Rapoport expects Williams’ son, Blake Williams, to depart from his role as a defensive assistant as well.

Williams, 62, has worked for several NFL teams over the course of his career including the Oilers/Titans, Bills, Redskins, Jaguars, Saints, and Rams before the Browns hired him as their defensive coordinator for the 2017 season.

After the Browns fired Hue Jackson in 2018, Williams was elevated to interim head coach. He was not retained and joined the Jets as their defensive coordinator.