Tom Pelissero of NFL Media reports that Jon Gruden has informed his coaching staff that he plans to resign as Raiders’ head coach. 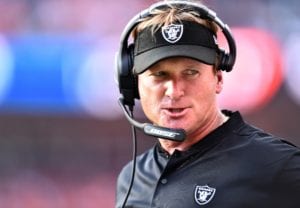 Pelissero adds that Gruden spoke with Raiders owner Mark Davis a short time ago to inform Davis of his decision.

Gruden has issued the following statement confirming his resignation:

“I have resigned as Head Coach of the Las Vegas Raiders. I love the Raiders and do not want to be a distraction. Thank you to all the players, coaches, staff, and fans of Raider Nation. I’m sorry, I never meant to hurt anyone.”

The NFL sent the Raiders more emails from Gruden to review as part of their investigation into the matter. However, the New York Times reported the details of several emails Gruden sent to Allen and others around the NFL that included misogynistic and homophobic language over the course of seven years.

Reports said that the NFL was waiting on a decision from the Raiders before getting involved in the matter, but it was clear that Gruden’s time as the team’s head coach was likely coming to an end.

Gruden, 58, began his head coaching career with the Raiders back in 1998. He was traded to the Buccaneers in 2002 after years in Oakland.

However, the Buccaneers fired Gruden after the 2008 season. He was out of the NFL for 10 years before the Raiders hired him as their head coach for the 2018 season.

Gruden was in the fourth year of his reported 10-year, $100 million contract with the Raiders.

For his career, Gruden has produced a record of 117-112 (51.1 percent), which includes five playoff appearances and one Super Bowl title with the Buccaneers.