Jay Glazer of FOX Sports first reported that the Lions are trading QB Matthew Stafford to the Rams for QB Jared Goff and additional compensation. 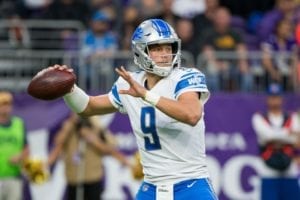 Tom Pelissero has the full breakdown of the trade:

The Rams will take on $43 million remaining on Stafford’s contract while the Lions will carry a $17.8 million dead money hit.

Detroit will inherit the $106.6 million owed to Goff over the next four years. The Rams will retain a $22.2 million cap hit for trading him.

Reports from earlier in the day mentioned that Stafford could be moved before the Super Bowl next. However, it looks like the Rams stepped up to close the deal well before then.

Stafford reportedly was drawing interest from a number of teams including the 49ers, Bears, Washington, Colts, Patriots and Panthers.

As for Goff, the Rams made it clear that they were looking to upgrade the quarterback position and while it seemed unlikely they would be able to trade him, it turns out the Lions were willing to take on his contract along with the draft compensation.

Goff, 26, was the No. 1 overall pick by the Rams out of Cal back in 2016. He was entering the final year of his four-year deal worth $27.9 million when the Rams picked up Goff’s fifth-year option.

From there, the Rams signed Goff to a four-year, $134 million extension that includes an NFL record $110 million guaranteed in 2019.