According to Mike Garafolo, the Steelers and WR Diontae Johnson have come to an agreement on a contract extension. 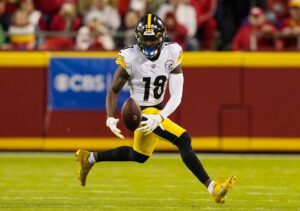 Garafolo says it’s a two-year, $36.71 million deal for Johnson. He had previously hinted that a shorter deal could be a solution for the two sides to get something done.

He adds Johnson gets $27 million guaranteed and $19 million in the first year of the deal. He’ll be an unrestricted free agent in 2025.

Johnson had been “holding in” from training camp, as he had reported but wasn’t practicing while talks took place.

The explosion of the wide receiver market this offseason as well as Pittsburgh’s organizational history of being reluctant to sign wide receivers to second contracts had made this a situation worth watching.

He was set to be an unrestricted free agent in 2023.