According to Ian Rapoport, the conclusion of the Week 1 loss to the Seahawks has prompted first-year Broncos HC Nathaniel Hackett to revamp his end-of-game decision-making process. 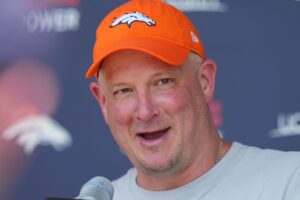 Hackett received a ton of criticism for electing to play for a 64-yard field goal instead of not calling a timeout and going for it on 4th-and-5 with star QB Russell Wilson.

He acknowledged during the week he would have handled things differently in hindsight and Denver has spent this week re-examining and revamping their end-of-game decision-making process.

“Everyone learned so much this past week, especially me,” Hackett texted Rapoport on Saturday. “And we are going to be better for it. Now we get to move forward, grow as a team and get ready for Houston

The process included tightening up the overall process, including what information Hackett gets via headset, including a mix of analytics-based information, advice and time management data, per Rapoport.

“It’s been about refining the thinking process,” one Broncos source told CBS Sports’ Jonathan Jones. “It’s also how did you arrive at that decision? Who was involved? What was the communication flow? Well before the game, pregame, during the game, during that drive, what could you have done better?”

“It’s not having the arrogance to think everything’s perfect,” the source continued. “Having some humility both publicly and internally and looking critically at our operation.”

Jones adds communication with the players has been good and overall the team thinks they did a lot of good things in Week 1, with the 433 yards of offense higher than all of the Broncos’ games from last season. There are just things to clean up.

It’s early in the season, but expectations for Hackett are already high with Wilson in tow and he recognizes he cannot afford for this to set the tone for his time coaching the Broncos.

Hackett, 42, began his NFL coaching career with the Buccaneers back in 2006 as an offensive quality control coach. After two years in Tampa Bay, the Bills hired him for the same position.