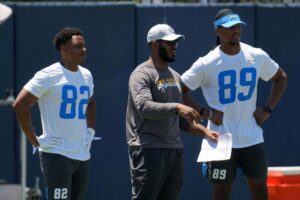 Koger has ties to Broncos’ new HC Nathaniel Hackett after being Green Bay’s offensive quality control coach from 2019-2020 while Hackett was offensive coordinator.

The Packers also interviewed Koger for their offensive coordinator job.

Koger, 32, began his coaching career at Saline High School in 2012 as their TEs coach. He later accepted a graduate assistant role at Michigan and worked for Tennessee and Eastern Kentucky before the Packers hired him as an offensive quality control coach in 2019.

After two years in Green Bay, Koger departed to become the TEs coach for the Chargers last year.