The Broncos have issued the following statement regarding the news that they will be without their starting quarterbacks on Sunday.

Statement from the Broncos: pic.twitter.com/HDgIV3l1y8

Adam Schefter of ESPN reports that all of the Broncos quarterbacks are ineligible to play on Sunday against the Saints after being deemed high-risk, close contacts. 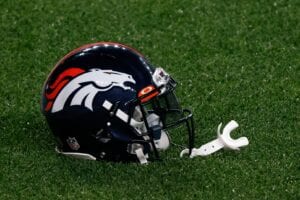 However, Schefter says the Broncos will not forfeit the game.

The Broncos sent home all three QBs Drew Lock, Brett Rypien, and Blake Bortles from Saturday’s practice over contact tracing concerns with QB Jeff Driskel, who was placed on the COVID-19 list earlier this week.

The Broncos’ quarterbacks reportedly were not wearing masks when they were pulled off the field.

Denver could be forced to turn RB Royce Freeman as their starting quarterback on Sunday, considering that he’s served as the team’s emergency quarterback.

Mike Klis notes that one other option for Denver is to start practice squad WR Kendall Hinton, who was a three-year starter at Wake Forest.

We’ll have more regarding the Broncos as the news is available.