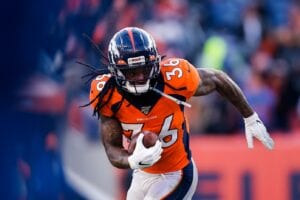 Marshall, 25, wound up going undrafted out of Florida State back in 2018. He was waived coming out of the preseason and later re-signed to the Broncos practice squad.

Marshall managed to make the 53-man roster each of the past two seasons and re-signed as an exclusive rights free agent each year.

In 2020, Marshall appeared in 12 games for the Broncos and recorded five total tackles.