Ian Rapoport of NFL Media reports that the Broncos have requested an interview with Chiefs OC Eric Bieniemy for their head-coaching job. 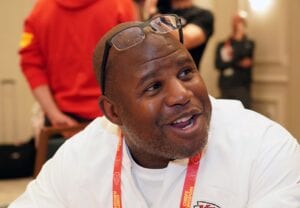 Bieniemy has been a hot coaching candidate the past few years but has yet to land a job.

Bieniemy, 52, played 10 seasons in the NFL for the Chargers, Bengals and Eagles before retiring in 1999. His NFL coaching career began in 2006 when he took over as the Vikings’ RBs coach.

The Chiefs hired him for the same position in 2013 and he was later promoted to offensive coordinator. Kansas City signed Bieniemy to an extension last year.