According to Mike Klis, the Broncos have agreed to a three-year extension with DT Mike Purcell. 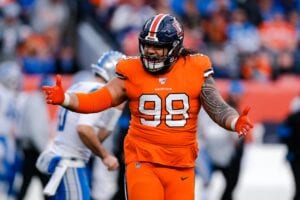 Purcell had just re-signed as a restricted free agent this offseason and is playing under the $3.259 million second-round tender.

Purcell, 29, originally signed on with the 49ers as an undrafted free agent out of Wyoming back in 2013. He bounced on and off the team’s practice squad before making San Francisco’s active roster for the 2015 and 2016 seasons.

The 49ers waived Purcell shortly after re-signing him to a one-year exclusive rights deal and was claimed by the Rams. After having brief stints on the Bears, Patriots, Panthers and Chiefs, he signed on with the Broncos last year.

In 2020, Purcell has appeared in four games and recorded 13 tackles and one sack. Pro Football Focus has him rated as the No. 67 interior defensive lineman out of 117 qualifying players.