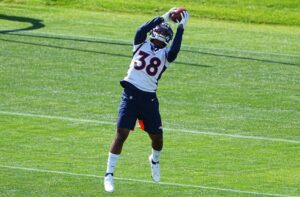 Cooper, 27, wound up going undrafted out of Stony Brook in 2019. He later signed a three-year, $1.755 million contract with the Falcons but was waived coming out of the preseason.

The Falcons did re-sign Cooper to their practice squad before calling him up in December. He later caught on with the Broncos late last season and returned to Denver on a futures contract this past January.

Cooper has yet to appear in an NFL game.