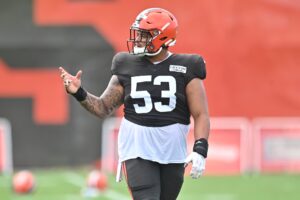 Harris, 23, was a four-year starter at Washington and was named First-Team All-Pac 12 in 2018 and 2019 before he was selected by the Browns with the No. 160 pick overall in the fifth round.

In 2021, Harris has appeared in five games for the Browns as their backup center.