According to Scott Petrak, the Browns are activating RT Jack Conklin from the physically unable to perform list after his recovery from surgery on a torn patellar tendon. 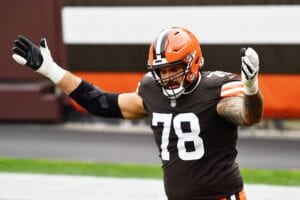 The team also waived WR Isaiah Weston who was carted off the field with a knee injury on Saturday and signed WR Derrick Dillon in his place.

Conklin tore his patella tendon in Week 13 against the Ravens and missed the remainder of the 2021 season. He later reworked his deal with the Browns.

He was due to earn $12 million in non-guaranteed money, yet will now earn $8 million fully guaranteed in 2022. This doesn’t include a $4 million playing time incentive that Conklin will have the chance to earn.

In 2021, Conklin started seven games for the Browns at right tackle. Pro Football Focus had him rated as the No. 14 offensive tackle out of 80 qualifying players.