According to Mary Kay Cabot of Cleveland.com, the Browns also have Bills LB Matt Milano on their radar as a potential free agent addition this offseason. 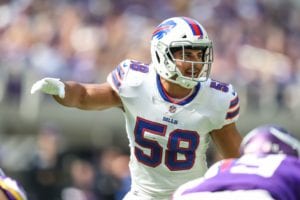 She also expects Cleveland to draft one or two linebackers this year. There’s also the possibility that the Browns attempt to re-sign B.J. Goodson and Malcolm Smith.

John Wawrow of the Associated Press, citing a person with direct knowledge of the situation, reported a few weeks ago that Milano will test the free agent market next month.

Wawrow mentioned that Milano’s decision to hit the free agent market is based on the Bills not being in a position to match the offers he’s likely to receive from other teams.

There has been some talk about the Bills possibly using the franchise tag on Milano. However, it appears as though they’re willing to let him test the open market.

Milano will be an unrestricted free agent this offseason.

In 2020, Milano appeared in 10 games for the Bills and recorded 45 tackles, 3.5 sacks, an interception and four passes defended.