According to Jake Trotter, the Browns are releasing WR Khadarel Hodge ahead of Tuesday’s deadline. 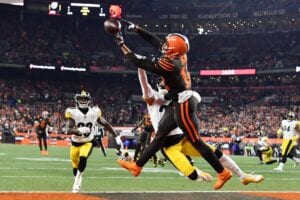 The full list of roster cuts for the Browns includes:

Hodge, 26, wound up going undrafted out of Prairie View A&M back in 2018. He later signed on with the Rams and returned to Los Angeles on an exclusive rights contract for the 2019 season.

Hodge was waived coming out of the preseason and later claimed by the Browns. Cleveland re-signed him to a contract this offseason as a restricted free agent.