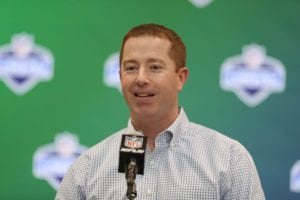 began his NFL career as a player personnel assistant with the Patriots in 2000. He worked his way up to director of pro scouting before being hired as the Lions GM for the 2016 season.

Quinn spent five years in Detroit before he was hired this past January.

During his time with the Lions, his teams produced a record of 31-43-1 over the course of five teams. This included two playoff appearances.