Mary Kay Cabot of the Cleveland Plain Dealer reports that Cleveland Browns HC Rob Chudzinski is ready to name Norv Turner as his next offensive coordinator.

ESPN’s Chris Mortensen reports that the Cleveland Browns will hire Panthers offensive coordinator Rob Chudzinski as their next head coach.

Keith Britton reports his sources have informed him that the Browns will likely hire former Chargers head coach Norv Turner as well.

Chudzinski interviewed with the Browns earlier in the week and must have made quite an impression on new owner Jimmy Haslam and CEO Joe Banner. Chudzinski actually spent time with the Browns back in 2007 as their offensive coordinator.

Turner will be the team’s offensive coordinator and his son, Scott Turner, is likely to join the staff as well.

Mary Kay Cabot of the Cleveland Plain Dealer tweets that the Browns could be prepared to make the switch to a 3-4 defense next year.

Dick Jauron is currently under contract with the Browns, so he could remain their defensive coordinator next given that he also has experience coaching a 3-4 defense.

Cleveland is expected to introduce Chdizonski as their head coach sometime Friday. 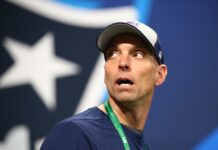 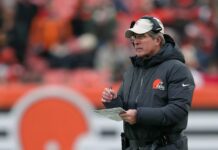