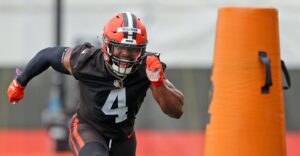 This move was expected after the news that he was undergoing season-ending surgery for a quad injury he suffered during Thursday’s game.

Walker, 27, is a former fifth-round pick of the Colts back in 2017. He signed a four-year, $2.7 million contract with Indianapolis and finished out the agreement in 2020.

From there, Walker signed a one-year, $3.5 million deal with the Browns in March of 2021. He re-upped again with the Browns this past offseason on another one-year deal worth $4.25 million.

In 2022, Walker appeared in three games for the Browns and has 13 total tackles including four tackles for loss and two passes defended.