The Cleveland Browns announced Friday that they have placed WR Ja’Marcus Bradley on the practice squad injured list with a hamstring injury. 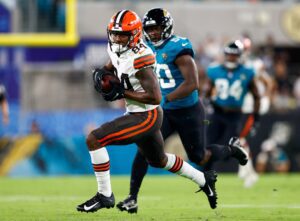 Bradley, 24, wound up going undrafted out of Louisiana back in 2020. He later signed a three-year, $2.28 million contract with the Browns and he was on and off of their roster last year.

Cleveland brought Bradley back on a futures contract this past January before once again placing him on waivers and re-signing him to their practice squad.

During his college career at Louisana, Bradley caught 160 passes for 2,359 yards receiving and 23 touchdowns. He also rushed for 30 yards on three carries over the course of 47 games.