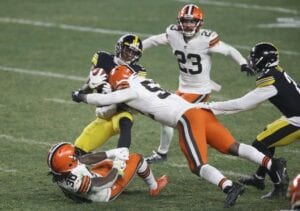 Lee, 25, is a former seventh-round pick of the Vikings back in 2017. He was waived coming out of the preseason before being signed to the Vikings’ practice squad.

The 49ers signed Lee to their active roster soon after and he was on and off of their roster before eventually signing on with the Lions.

Detroit opted to waive Lee and he was later claimed off waivers by the Browns. Lee appeared for Cleveland in the regular season, and the team re-signed him back in March.

Lee has been on and off of their roster this season.

In 2021, Lee has appeared in four games for the Browns and recorded five tackles.