According to Mary Kay Cabot, Browns TE David Njoku would prefer to be traded by the deadline on November 3rd.

Njoku had rescinded an earlier trade request this summer after the Browns signed TE Austin Hooper in free agency and drafted TE Harrison Bryant in the fourth round.

However, the former first-round pick has apparently changed his mind again and believes that a change of scenery to a potentially less-crowded depth chart would be the best move for his career.

It remains to be seen if the Browns are any more inclined to trade Njoku than they were this summer.

In 2020, Njoku has appeared in two games for the Browns and caught four passes for 56 yards receiving and one touchdown. 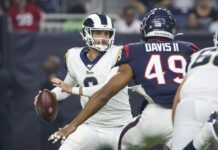