According to Howard Balzer, the Cleveland Browns brought in 11 free agents for workouts on Monday including DE Damontre Moore.

Of this group, the Browns signed Brown to their practice squad.

Moore, 26, is a former third-round pick of the Giants back in 2013. He lasted over two years in New York before he was waived in December of last year.

The Dolphins wound up claiming him off of waivers from the Giants. However, he was later waived and signed by the Raiders before being cut loose in October. Moore eventually caught on with the Seahawks and finished out the year in Seattle.

Moore served a two-game suspension for violating the substance abuse policy to open the season.

In 2017, Moore has appeared in three games for the Cowboys and recorded five tackles and no sacks. 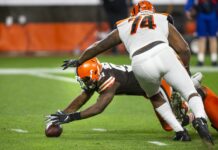