According to Tom Pelissero, the Browns are waiving P Jamie Gillan. 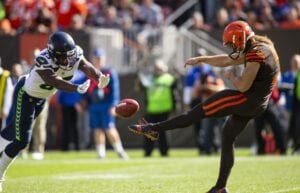 He had recently been placed on the COVID-19 list and the performance of relief P Dustin Colquitt convinced Cleveland to move on from the struggling Gillan.

Gillan, 24, signed with the Browns as an undrafted free agent out of Arkansas Pine-Bluff in 2019. He won the competition for Cleveland’s starting punter job.