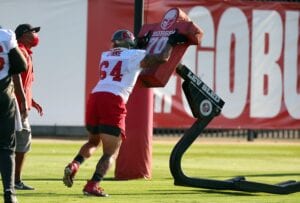 Stinnie, 27, signed on with the Titans as an undrafted free agent out of James Madison in May of 2018. He was among Tennessee’s final roster cuts in 2019 and signed to their practice squad once passing through waivers unclaimed.

The Titans promoted Stinnie to their active roster soon after before waiving him again. He was claimed that time by the Buccaneers. Tampa Bay brought him back on a new contract this past March.

In 2021, Aaron Stinnie has appeared in five games for the Buccaneers, making one start for them at guard.