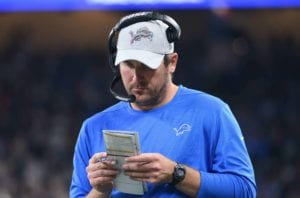 This is the first official interview request from the Buccaneers since they made the decision to part ways with Bryon Leftwich last week.

Cooter, 38, began his NFL coaching career with the Colts back in 2009 as an offensive assistant. He had brief stints with the Chiefs and Broncos before the Lions hired him as their QBs coach in 2014.

Detroit promoted Cooter to offensive coordinator during the 2015 season and he’s remained in the role until becoming the Jets’ running backs coach in 2019. He parted ways with New York in 2020 and eventually took the passing game coordinator role with the Jaguars last year.

In 2018, the Lions’ offense ranked No. 24 in total yards, No. 25 in points scored, No. 23 in rushing yards and No. 20 passing yards with Cooter as their offensive coordinator.