The Tampa Bay Buccaneers are bringing in former Texans’ RB C.J. Prosise for a workout this week, according to Albert Breer. 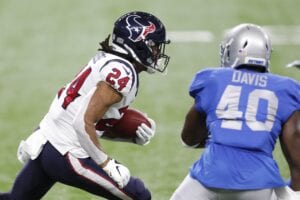 Prosise, 26, is a former third-round pick by the Seahawks out of Notre Dame in the 2016 NFL Draft. He finished out his four-year, $3.11 million rookie contract and was testing the open market for the first time in his NFL career before he signed on to the Texans’ practice squad.

Prosise has been on and off of the Texans’ roster this season and was recently waived by the team.

In 2020, Prosise has appeared in 10 games for the Texans and rushed for 19 yards on 10 carries (1.9 YPC) to go along with five receptions for 18 yards receiving and one touchdown.