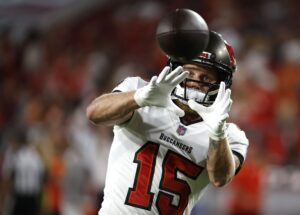 Beasley’s agents told Pelissero that Beasley “is ready to be with his family after playing in 11 seasons and it’s time to be a full-time dad and husband.”

He had other teams interested in him this season but he decided to sign with the Buccaneers practice squad.

In 2022, Beasley appeared in two games for the Bucs and caught four passes for 17 yards.

The staff here at NFLTR wishes Beasley the best in his retirement from the league.